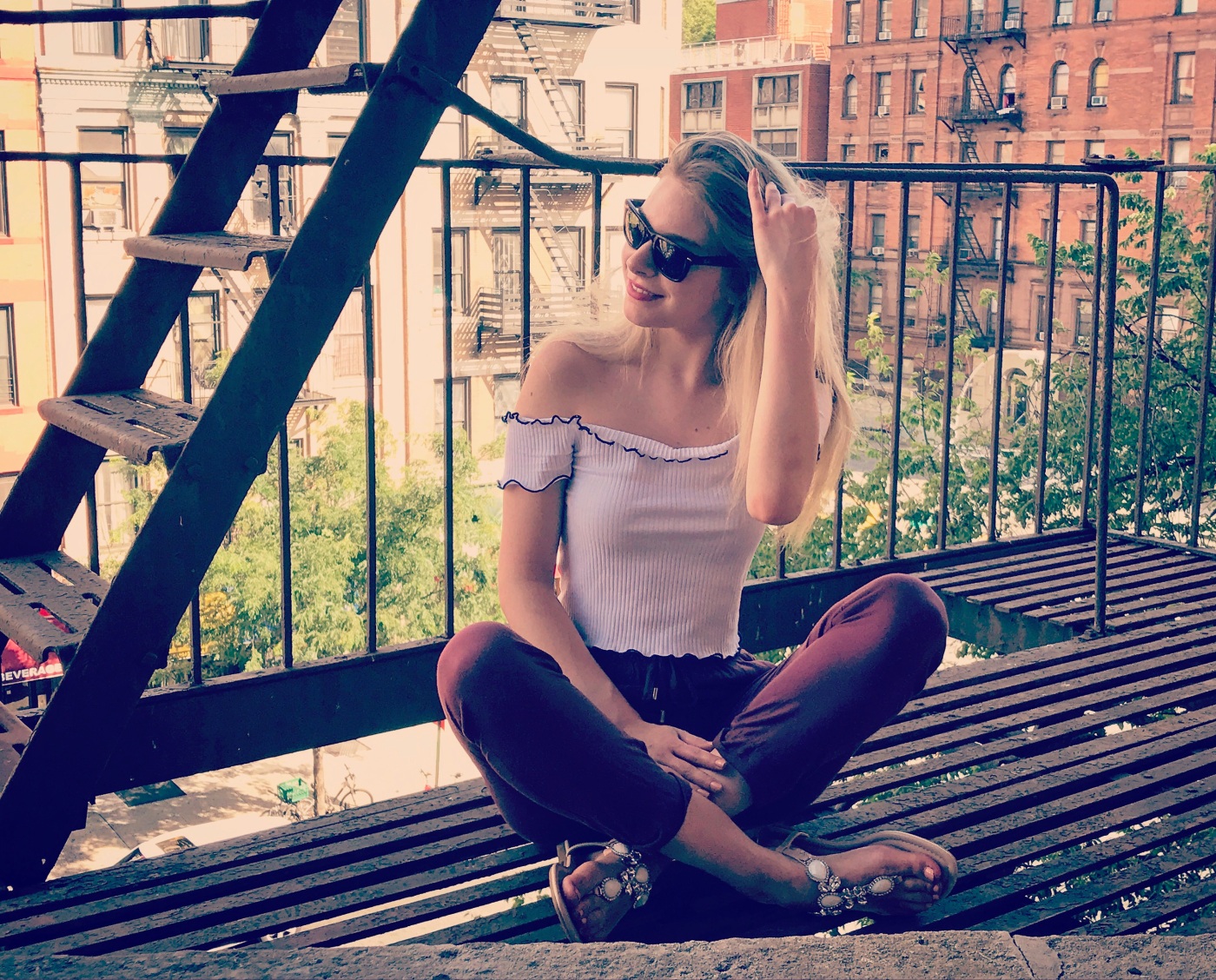 This city keeps me laughing, there’s no doubt about that. I recently came across an image on Facebook of a man on the subway with his pet peacock and not one person on the train took notice. In fact, they were all staring at their phones going about their own business. It just summed up the city for me. I’ve had countless odd experiences on my adventures around New York and the strange thing is, when you first get here, you notice the craziness all around you but then you get used to it, it takes a lot more to shock you.

I have yet to come across who I call Fidget Spinner Guy. You may have seen him on Facebook or your friends Snapchat videos. If not, I can only give you a link to his work because he’s too unique to sum up in words. Again, my friend Tash tagged me in a Facebook video of him captioned “meanwhile in New York”.. just too typical. The day I stumble across this creature I will be in a state of euphoria. I told my friends I think it’s a facade and he’s actually quite intelligent but everyone disagreed. Well, it turns out he’s a performer named Matthew Silver so I was right but it also makes him a little less nuts.. I’m still a huge fan. I know it’s a horrible thing to say but because I have just addressed that this is a horrible thing to say, I can say it- the crazies are everywhere. You sometimes come across odd characters on your commute in Ireland, but NYC takes the biscuit. There’s actually too many subway incidents to mention, it really is free entertainment. There’s this one subway driver who makes my ride home just bliss. He’s not at all on the right career path. I call him 1 Train DJ. Any MTA driver will put on their most ‘I hate life in general’ accent when speaking at every stop but 1 Train DJ’s like “You are riding the 1-1-1 train uptown, step ALL THE WAY IN”. I hate riding the subway but when you’ve got entertainment like this, I’d happily miss my stop. I’m sure for the average Joe’s commute who has heard him 300 times doesn’t share the same excitement but it’ll ever get old for me. Any excitement on the trains is welcome in my books (not the soliciting though, it’s constant). I was traveling to Met Life Stadium for a Beyonce concert back in October and Comin-Con was taking place at Madison Square Garden. I had to push through 50 Harley Quinns and 30 Chewbaccas to get to the ticket machine. It was just like the movie Ted 2, brilliant.

I thought I would walk by a lot more celebrities living here, but you don’t come across them too often. Or maybe I’m just not looking at passers by and they have good disguises. I wouldn’t really approach them anyway unless I got talking to them. I can imagine if I were a celebrity going about my daily life I’d hate people approaching me for a picture every two minutes. I have met Ryan Tannehill, the quarter back for the Miami Dolphins but of course I didn’t recognise him. I’ve also met Jessica Pimentel from Orange is the New Black and she’s far less scary in person. Actually, today I walked by John Lithgow who plays Winston Churchill in The Crown. But back to typical New York City.. my parents were strolling around the city one day and came across Katy Perry handing out cherry pie from a food truck. As you do, Katie.

And then there’s the drunken stories that come together after a crazy NYC night out. I love telling tales when I’m drunk. Not lies to my friends or anything but when strangers approach me and I don’t feel like small talk, I do love winding people up. Myself and my friend Johnny went to an Irish-owned bar where we knew the bartenders. We were sitting at the bar when two American guys picked up on our accents and asked us what we were doing in NYC. Johnny wasn’t really listening but I was bored so my imagination and I took full advantage. I told them we were on our honeymoon having just married in the Bahamas. “Why New York? What will you be doing while you’re here?” So I named all of the Irish bars we knew in the area just to live up to the stereotype, y’know. Anyway I got bored and started chatting to Johnny again and they musn’t have heard us talk about living and working here because once they left, Kevin the bartender informed us they had payed our tab! I felt awful but it was hilarious at the same time.

I am the biggest lightweight you’ll ever meet and I also have a tendency to forget my limits. It’s quite frustrating actually because I never had this problem in Ireland. One night, I only had four rum and cokes in the apartment and we got in an Uber downtown. I don’t remember this but I decided I couldn’t go into the club because I was too drunk (sensible drunk Rachel), booked another Uber and went straight home. Little did I know, I had left my keys inside. I didn’t want to call my roommates and have them come all the way back just to ruin their night but I really REALLY needed to pee. I knocked on my 45 year-old neighbor’s door (never met her in my life) to ask to use the toilet. I was wearing a new jumpsuit and I couldn’t get the zipper down so I asked for her help.. nope. We had to get a scissors. I stayed in her apartment in her pajamas for hours chatting and giving her pointless information about my life whilst petting her 50 cats. Okay, maybe there were just three but when I was drunk at 3am I swore they were everywhere.

Speaking of Cats, I was working from The Roxy Hotel in TriBeCa one day having seen CATS on Broadway the night before. I asked my boss has he ever been to the show and a guy at the next table turned around and said “I thought I recognized you, I saw you there last night”. There are 8.5 million people in this city!! He was one of the cats performing in the show and said he saw me passing the stage door. How strange is that?? I was wearing the same coat so maaaaybe he was right, I hope.

Don’t talk to strangers is the number one rule here but sometimes you meet people in bars and cafes and you’ll be surprised what can come from it. I got talking to a guy about what I was doing here,  my broadcasting degree and that I needed to find an internship. It turns out he works in NBC and interned with Jimmy Fallon. He took me into the Rockefellar Center for a tour of NBC and where they shoot SNL. He even passed my resume on to some collegues. Sadly, they don’t take on temporary visa holders but hey, experience. So sometimes talking to strangers is a good idea. Maybe stick to people your own age at bars though and not strangers on the train.

I’ve now learned to tell who is Irish or English before they speak. It’s something you pick up from being away from home and living in a city where half of the population are Irish. We can’t escape each other! Exactly why I chose to live in Manhattan and not Sunnyside or Yonkers. I went for lunch with my American friend in Chelsea and it was a very quiet restaurant, 3pm on a Tuesday. The only other table were 6 Irish people. Later on that day I was working on my laptop at Bryant Park. This guy started talking to a girl my age who was sitting waiting for someone on a bench. I could tell she was uncomfortable so I said “Nicole, can you take a look at this?” It turns out she was from Dublin. Five minutes later two women pass by and in the most Irish of accents “Look at all the people sitting out on the chairs, this must be the place to be”. All in the one day! I swear there are more Irish here than there are in the whole country at home. It’s not all bad though, it’s comforting to know your own are close by and we always help each other out.

Some stories I’ll keep to myself and not display on the internet because they involve my own embarrassment and we won’t be having that. Unless you have tequila.